As a mid-cap company operating globally, HMY Group faced the liquidity and risk challenges typically more familiar to large multinationals, but without the same scale or leverage with their banks. In this article, Ignacio Sanchez, Treasury & Risk Manager, describes how HMY Group has addressed the challenge of managing FX exposures, whilst minimising utilisation of bank credit lines.

HMY Group is a market leader in shopfitting, initially focusing on large supermarkets but now supporting the entire spectrum of retail premises. Although M&A has been an important part of its strategy throughout its history, the current group was formed from the merger of two companies (Hermes and Yudigar) in 1998, which had previously been headquartered in France and Spain respectively. Both companies had proved very successful in meeting the needs of customers in their domestic markets, but recognised that they would be in a better position to meet the needs of their customers as they expanded both Europe-wide and globally by merging. For example, when Carrefour expanded into Spain, the company needed a consistent approach to fitting out their retail facilities to create a distinctive, trusted brand across their business. Similarly, as customers reach beyond Europe into new regions, they are increasingly relying on HMY to support them in each new market. As a result of expanding our business in line with that of our customers, we now have eight factories globally and employ around 4,500 people in 65 countries. Although HMY is not the largest company in this industry, we have the widest geographic presence, whereas others have tended to focus on particular regions. 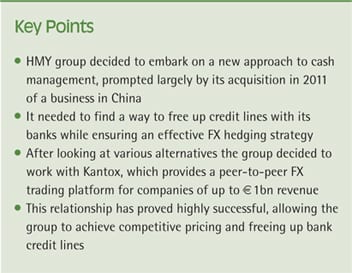 Without question, the Covid-19 pandemic has strengthened the business case for digitisation and dramatically increased the pace of digital adoption. Treasury 4.0 technologies, such as data analytics and application programming interfaces, will be key to building...