Over the past decade, Roche has developed a world-class global treasury organisation – a process that has been distinguished by close collaboration between treasury and IT to become a key service provider to the business. Since 2007 when Roche first featured its SAP implementation in TMI, treasury and IT have optimised many of its treasury processes, developed its in-house bank into a payments and collections factory, including the use of virtual accounts and implemented SWIFT for bank connectivity. These initiatives have been widely recognised both across the Roche organisation and externally. For example, Roche was awarded Treasury Today’s Adam Smith Award 2013 in the category for Best Working Capital Solution. In this article, Marco Brähler describes the next stage in Roche’s pioneering treasury and technology journey. 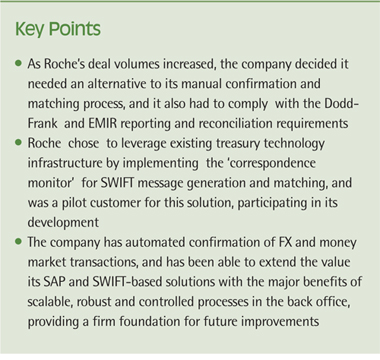 The treasury team at Vectrus partnered with BNP Paribas and Kyriba to harness the power of automation to drive accuracy.

The shelves of the treasury technology supermarket have never been better stocked.

As 2022 continues to speed by the extent to which the pandemic accelerated treasury tech adoption is becoming clear.

Is a Treasury Tech Self-Build Feasible?

Treasury is an increasingly technology-enhanced function, and some treasurers have taken their involvement to the next level, building their own solutions.