As a result of the merger in 2006 between Hilton Hotels and Hilton Hotels International, Hilton Worldwide’s treasury executives took a hard look at its treasury operations, and subsequently embarked on an ambitious project to re-engineer its enterprise treasury system. As part of this project, the company realised it needed to find a way to simplify communications with the large number of banks it dealt with globally. After considering all options, the firm decided to adopt SWIFT, an industry standard for financial messaging, and to appoint a service bureau to provide a single point of connectivity to its banking network. Not only did this simplify operations, and reduce risk and costs, but it helped to free up valuable resources so treasury staff could focus on mission-critical finance tasks, rather than IT.

Following the 2006 merger, the company moved forward with a significant project to implement a new enterprise treasury system, and initiated the integration of the accounting platforms of its US and international businesses. As part of this initiative, the company realised it also needed to look at its financial messaging capabilities, and find a way to improve and simplify operations and reduce risk and costs. The company had business relationships with many banks globally and, as such, communications with each bank had become increasingly burdensome. Each day, the company had to log onto the websites of all its banks and download the bank statements, and then upload them into its treasury system. To simplify the process and impose consistency on its banking communications, Hilton Worldwide decided to adopt the SWIFT financial  messaging  standard. 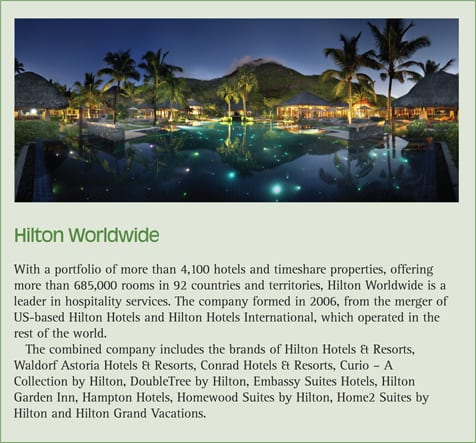 Data security in financial communications is of paramount importance for the company, and it was a key factor in the choice of SWIFT and its secure financial messaging network. Another critical factor for a global operation like Hilton Worldwide was the fact that SWIFT messaging is widely adopted across the international banking industry. However, the adoption of the messaging standard brought its own challenges. SWIFT is technically complicated and requires considerable IT expertise, and Hilton Worldwide did not wish to develop a full set of SWIFT skills in-house. Bringing new staff on board would be costly; likewise training existing staff would take time and also cost money. Further, we realised early on that using treasury professionals to manage sophisticated messaging systems was not the best use of critical skills: we wanted the treasury team to be specialists in treasury, not IT.