Over the past decade, Roche has developed a world-class global treasury organisation, a process that has been distinguished by the close collaboration between treasury and IT to become a key service provider to the business. Since 2007 when Roche first featured its SAP implementation in TMI, treasury and IT have gone on to optimise many of its treasury processes. Most recently, Marco Brähler described Roche’s automated SAP and SWIFT-based confirmation exchange and matching solution. In this edition, we are delighted to welcome Martin Schlageter who describes how Roche’s treasury has continued to leverage its centralised platform to centralise and optimise processes, and enhance the value it offers to the group. 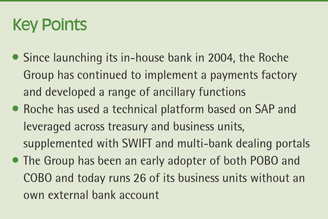 Corporate treasury is often not well understood by the wider business – and vice versa – so as a result, treasury often becomes disconnected with the needs of the organisation which in turn limits its value. Since we first launched our in-house bank in 2004, which has been a major collaboration between treasury and IT, we have transformed our role and recognition within the Roche group. Initially, our focus was to centralise treasury activities across the group, which then extended to implementing our payments factory and subsequently, to develop our capabilities in a range of ancillary functions. By doing so, we are now firmly positioned as a value-added business partner to entities across the group, with close co-operation to facilitate growth and manage risk.

One silver lining from the Covid-19 pandemic is that it has supercharged trends around treasury technology – both in the adoption of new technology by corporates and the development of cutting-edge technologies that...

Is a Treasury Tech Self-Build Feasible?

Treasury is an increasingly technology-enhanced function, and some treasurers have taken their involvement to the next level, building their own solutions. In the company of those who have travelled this path, we...

Michael Kolman (ION Treasury) explains to TMI just how far the TMS has come since its arrival 40 years ago.

Fides offers virtually every payment and messaging format that a company could possibly need and is equipped to implement any additional formats required.