In March 2010, leading forestry and paper company Fibria appointed Bank of America Merrill Lynch as its international banking provider. This article looks at the background behind this decision and some of the achievements that the company has accomplished so far.

Although proud of its Brazilian heritage, Fibria has become a truly international organisation, with over 90% of its sales outside of Brazil. As the business grew, with group companies established in North America, Europe and Asia, Fibria appointed a variety of banking partners, whereby business units worked directly with local and regional banks to satisfy specific local requirements. As the company embarked on a series of acquisitions, these relationships multiplied, resulting in a large, disparate banking panel. Furthermore, the group companies had their own treasury and ERP systems, resulting in a lack of visibility, integration and automation across the business, and no ability to create economies of scale.

Prompted by a significant merger in 2008, and a desire to demonstrate treasury best practices, Fibria made the decision to centralise and rationalise its treasury activities and banking partners. The objective was to appoint a single bank to enable processes, connectivity and service levels to be standardised globally. Having issued a request for proposal (RFP) and conducted an extensive analysis of five potential banking partners, Fibria appointed Bank of America Merrill Lynch in March 2010 to provide all aspects of its international treasury activities outside of Brazil, including regional treasury services for group companies. There were various reasons for this decision. Firstly, the bank’s global presence supported Fibria’s activities in each region. Secondly, the company was impressed by Bank of America Merrill Lynch’s consultative approach. For example, although the decision was taken in Brazil, the bank provided the team with insights into global best practices and suggested innovations that would enable the company to optimise treasury and cash management activities in each region, as well as achieving its head office objectives. Thirdly, Bank of America Merrill Lynch provided extensive implementation support for the initial implementation and handover, both in Brazil and in the company’s international offices. 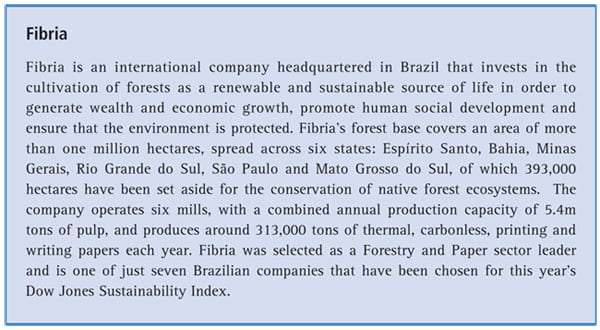