Companies operating in South Africa consider rand volatility to be a major problem. Ninety-one per cent of respondents to our currency risk management survey rated their companies as being sensitive or very sensitive to the exchange rate. The less systematic the company’s hedging practices, the more likely it was to be highly sensitive to exchange rate moves. Encouragingly, the survey suggests that a sound framework for currency risk management is well entrenched and that hedging instruments are well understood. However, these findings are less conclusive for small and medium-sized firms, which were more likely to have a less systematic approach to currency risk and less likely to be comfortable with hedging instruments and strategies. Views were mixed on whether regulatory issues (exchange controls and hedge accounting) complicate exchange rate risk management.

In July 2013, National Treasury and Rand Merchant Bank (RMB) surveyed companies operating in South Africa in an attempt to better understand their currency risk and currency risk management operations. We extend our thanks to the ACTSA members who participated. The 192 respondents were largely involved in currency decision-making and operated in a range of sectors, with particularly heavy representation from the manufacturing sector and larger businesses. This article summarises the survey’s results.

The impact of exchange rate volatility 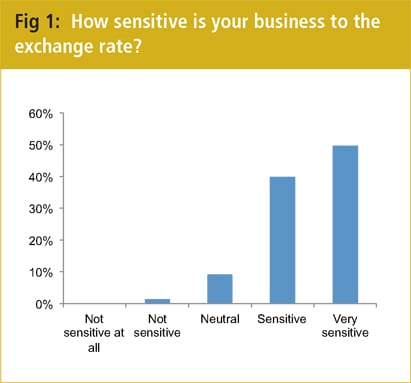 The currency is a major concern for South African businesses, with 67% identifying it as one of the top three risks facing businesses. Cash flow (43%), commodity prices (41%) and political risks (36%) were the next most frequently raised issues.