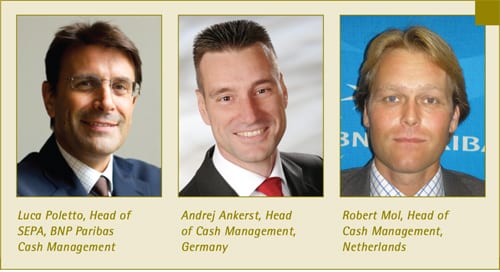 Over the past 12 months, many websites have displayed a ‘countdown’ to the 1st February 2014 end date for SEPA migration. As the countdown reached 3 months, 1 month, 1 week, anxiety grew, not least due to ongoing uncertainty about the adoption of an additional transition period. While some uncertainty remains, European payments systems did not collapse on 1st February. Rather, this date marks not the end, but the start of a new era for cash management. The challenge for banks, regulators and corporations alike is how best to leverage SEPA as a basis for future innovation.

In the final months before the SEPA migration end date, we saw a large number of customers migrating to SEPA credit transfers (SCT) and direct debits (SDD), particularly in December 2013 (74% of credit transfers and 41% of direct debits, source: European Central Bank) and January 2014, when many large remitters completed their migration.

An additional transition period of six months after the formal end date to 1st August 2014 was ratified by the European Parliament on 4th February 2014. The aim of this additional grace period is to enable financial participants, particularly small and medium-sized enterprises, to complete their migration projects without risk of payment rejection. However, notwithstanding this, central banks and banking associations in several countries have already formally agreed differing transition periods that vary from 2 to 6 months, particularly in countries where SEPA migration rates are already high. In Belgium and Ireland, for example, the transition deadline is 1st April 2014 and in Spain, 18th March 2014 for credit transfers and 10th June for direct debits.