SFTZ has been a hot topic this year. What is all the excitement about? And is SFTZ really critical for China treasury? China’s central bank, the People’s Bank of China (PBoC) has opened up cross-border two-way sweeping nationwide, and schemes from PBoC for CNY and from the State Administration for Foreign Exchange (SAFE) or FCY cover all but the largest treasury needs.

The story so far

The Shanghai Free Trade Zone (SFTZ) has broad scope well beyond corporate treasury, and most of that is beyond the scope of this article. SFTZ shot to prominence in treasury circles as the test bed for liquidity management solutions that effectively open China up for corporate cash management.But first, let’s recap on the development in China. A decade ago, CNY was a controlled currency, and getting money in and out of China required approval and registration with the State Administration of Foreign Exchange (SAFE). Incoming capital had to be registered and handled in special equity bank accounts. Outgoing trade payments required taking a stack of paper to the local SAFE office to get their chop (red official stamp), and then taking it to a bank to initiate payment.SAFE was the only regulator involved in cross-border transactions because CNY was not convertible. Treasurers knew that the People’s Bank of China (PBoC) set the interest rates that banks charged and paid to their subsidiaries but had few direct dealings with them.In 2004, PBoC allowed Hong Kong banks to offer retail CNY services. This facilitated Hong Kong citizens bringing back CNY from their weekend shopping trips in Shenzhen to benefit from the carry trade. They had nowhere to deposit their CNY, so in 2007 PBoC allowed CNY bond issues in HK – the so-called ‘dim sum’ bonds. A few western MNCs have availed themselves of this opportunity.

Things got even more exciting in 2009 when PBoC launched a pilot scheme allowing selected corporates to settle commercial flows cross-border in CNY. This is especially significant because until 2008 only SAFE regulated cross-border transactions. Now we have two regulators cross-border in and out of China: SAFE regulates FCY (foreign currency) flows and PBoC regulates CNY (Chinese yuan) flows.Things have moved very fast since then. Most notably, in 2011 PBoC completely opened up cross-border commercial flows, and, since there is still a lot of confusion in the market about this, I will re-emphasise that since January 2011 any company in China can settle commercial invoices cross-border in CNY. Also note that CNY cross-border flows are regulated by PBoC; and PBoC has delegated checking of documentation to banks; so you can pay CNY cross-border electronically and with straight-through processing (whereas when you pay FCY you still have to get your stack of documents chopped by SAFE before payment). This obviously gives a big boost to China’s ambition of internationalising its currency: a goal which is strongly supported with an impressive web of swap lines and new regional and global multilateral banks.

PBoC went on to allow pilot corporates to sweep excess CNY to offshore. Then very quickly it opened up the scheme nationwide, and delegated approval to the banks – which makes implementation much easier. So that was the end of trapped cash in China!Treasurers are demanding people. PBoC might have expected some gratitude for ending the trapped cash problem. Instead treasurers complained about the lack of two-way flows (i.e., they wanted to be able to lend in to China as well as get cash out of China). The nice people at PBoC got the message, implemented some pilot two-way sweeps and in June 2014 announced nationwide two-way sweeping with approval delegated to the banks.

Not to be outdone, SAFE has also been working on FCY flows. It has implemented the FX Master Account (FMA) to encourage corporates to do their global cash management in Shanghai. It has also implemented cross-border two-way sweeping, first in Shanghai and since June 2014 nationwide. The big difference is that SAFE wants to approve all quotas before implementation, whereas PBoC, partly because it did not have the infrastructure to approve corporate quotas, has consistently delegated authority to the banks after the initial pilots. Of course, PBoC can audit the banks at  any time, so there is no risk of non-compliance.

So SFTZ has been an important test bed for both SAFE and PBoC pilots. But does it still matter, now that both SAFE and PBoC opened up their two-way sweeping schemes nationwide in June 2014?At all the conferences I have chaired and moderated recently (ACTS in Singapore, SIBOS in Boston, EuroFinance in Budapest), this has been a critical question. Many treasurers were waiting to assess whether they should establish a base in SFTZ (or another FTZ). Others are just getting on with it, and apparently succeeding. EuroFinance in Shanghai came just after PBoC notice 324 issued early Nov 2014. Notice 324 details the implementation rules for nationwide cross-border two-way sweeping. Companies must be large and established, net inflows may not exceed 10% of China group companies’ total equity including retained earnings, net outflows have no limit but the group onshore cannot borrow to sweep offshore, and the sweep must be done from a dedicated account with a bank experienced with cross-border CNY.SFTZ may still have a small edge over nationwide because SFTZ sweeps do not have a pre-set limit; but they are subject to monitoring and users expect that PBoC will object if amounts get too large. This regulatory largesse probably stems from the tight conditions for setting up in SFTZ in the first place.As a reminder, the above applies only if you want to lend CNY into China from offshore. If you want to get CNY out of China, that has been open nationwide for a while and is working smoothly. If you want to settle commercial invoices cross-border in CNY, that has been open nationwide since 2011 and is working smoothly. This possible benefit of SFTZ applies only to corporates needing to lend CNY into China cross-border. (Of course, you can still do it the old-fashioned way with a FCY intercompany loan registered with SAFE.)Basically, if you do not already have a presence in SFTZ, it looks as if it will not make sense to set one up for liquidity management purposes. Everything you can do in SFTZ, you can also do nationwide. PBoC Notice 324 has confirmed nationwide cross-border two-way CNY sweeping on reasonable terms. There is a small advantage of larger inbound quotas in SFTZ; no one has yet complained to me about quota sizes.

Conclusions so far: It is amazing progress in a very short time.So what are treasurers waiting for? After an initial jump, CNY offshore (aka CNH) volumes have stalled. Treasurers are risk averse. But I think the main cause is misinformation. I still get people asking me how to become a Mainland Designated Enterprise (MDE). MDEs were the pilots for cross-border CNY back in 2009-2010; since 2011 any company anywhere in China can settle commercial invoices in CNY cross-border; MDE has been irrelevant and obsolete for no less than four years. That kind of data will slow decision-making.Any new process is subject to glitches. Here are some of the impediments I have heard about (in no particular order). China is a huge country, and the changes implemented by SAFE and PBoC are momentous. Obviously, there is a learning curve on all sides – corporates, banks, counterparties, regulators, tax authorities, not to mention advisers and auditors. Based on my observations, the single biggest impediment is misinformation. The rapidity of regulatory change unfortunately fuels this, but, since the changes are fundamentally beneficial to treasurers, it would be churlish to complain.

From a treasury perspective, the regulatory environment in China has improved more meaningfully and much faster than even the most optimistic treasurer could hope.For all practical purposes, China (nationwide, not just FTZs) is now open for cross-border commercial flows and liquidity management in CNY. Ignore the naysayers. Talk to people who already benefit from this historic opportunity – they will be able to tell you how to deal with the potential hiccups. 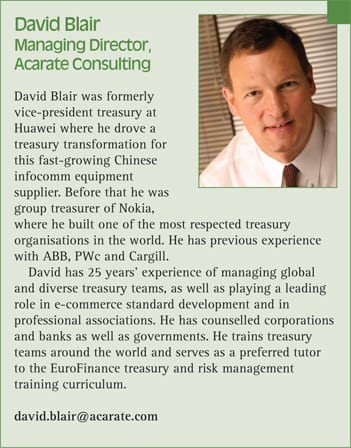 How to Gain Visibility and Take Control of Payments and Cash

When it comes to payments, cash, liquidity and spend management, bank system independence is both desirable and achievable....

The Three-Step Plan for a Successful M&A Deal

A cross-functional team is crucial to the positive outcome of an M&A deal and, once the ink has dried, treasury teams will...