The Thomas Cook Group was formed in 2007 as a result of the merger between Thomas Cook AG and MyTravel Group plc. One of the outcomes of this was that the Group Treasury function, which has primary responsibility for risk management and financing, moved from Thomas Cook’s former headquarters in Germany to the UK. Front office is based in London and back office in Peterborough. In addition, the group has five regional treasury centres that report to local CFOs. In recent years, Group Treasury has undergone substantial change and enhancement, one element of which has been the replacement of its confirmation matching system.

Following the completion of the merger, we embarked upon a banking tender in 2009, which resulted in a change of banking partners. As the existing confirmation matching system had been provided by one of our incumbent banks, we needed to find a replacement system that would replicate our existing functionality as a minimum, and contribute to a high level of control and straight-through processing for treasury transactions. 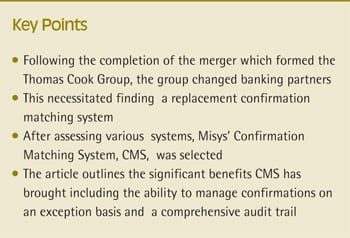