This article addresses the problems of the way in which ESMA plans to apply the exemption granted to corporate treasurers for dealing in OTC type derivative products. Over three and a half years after the start of the long-drawn out financial crisis, the regulators have still not delivered this reform. We find this time lag and the first indications of the content of this reform worrying, at a time when many of us thought that victory was in the bag. The battle may perhaps be won, but certainly not the war. And yet again, judging from the first round, we may fear that victory could be relative. However, the second draft proposed by ESMA was much better.

In spite of the long-drawn out crisis that we have experienced since September 2008, the new post-G20 regulations are taking a long time to appear. The regulators are cogitating, consulting, debating endlessly and trying to devise strict and clear standards that ideally would apply to everybody. However, as always when a lot is at stake, finalising such rules is a major challenge. To start with, the lobbyists have entered the fray and are all vigorously and steadfastly defending their patch of turf, coming up with endless arguments. These arguments are most often understandable and justifiable, although somewhat specific to a particular category of market players, an industry sector, a product type or a particular business line. Laying down regulations for everybody without exception is therefore an almost impossible exercise. 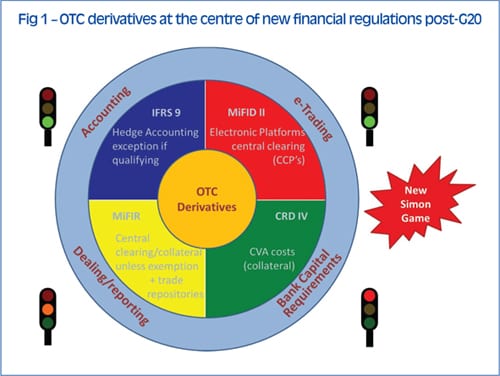 The difficulty of the task in part explains this elephant-like gestation period for the new financial regulations (for example OTC Derivatives, MiFIR ,MiFID II, CRD IVi, Basel III, CRA, etc.). Almost four years after the start of this lengthy financial crisis, nothing has yet been finalised. We understand the scale of the task. Nevertheless, are we not at risk of losing this impetus instilled by an authoritarian G20, this desire to regulate dangerous financial practices ever more drastically, of losing this political consensus on preventing another crisis happening again in the future? With the lapse of time we risk losing the impetus, the enthusiasm and most of all the vigilance needed to avoid experiencing such disastrous financial scenarios again.