With the end date for domestic payment instruments in euro only a few months away, all companies should now have completed, or have made considerable progress towards migration to SEPA (Single Euro Payments Area). A vital element of the migration project is the use of XML ISO 20022 formats (XML) on which SEPA payment instruments are based. This article outlines some of the issues that treasurers and finance managers need to consider when implementing XML as part of a SEPA migration project, and the opportunity that XML presents to introduce considerable process efficiencies. These are further enhanced when used in combination with a robust and bank independent communication channel such as SWIFT.

Treasurers first need to ensure that their systems support XML, including both the channels with which they communicate with their banks, and that their internal systems, such as ERP, and treasury management systems (TMS) support XML formats. If using SWIFT, or modern electronic banking systems provided by the major banks, whether web-based or host-to-host, this will not be an issue. Systems provided by smaller, local banks, or older versions, may need to be upgraded or replaced. Before XML, proprietary banking systems transmitted and received files and messages in diverse formats, which in some cases has made it difficult to change banks, or the technology used to connect to them. In contrast, XML is a standard format, which better facilitates a harmonised approach to bank connectivity. For example, companies can add or change banks more easily, without the need to amend systems to send or accept files and messages in new formats. Alternatively, the SEPA migration project may also be an opportunity to implement SWIFT connectivity. SWIFT provides bank-neutral, robust, secure connectivity across multiple banking partners, thus further enhancing companies’ bank independence, and supports both XML and other formats. 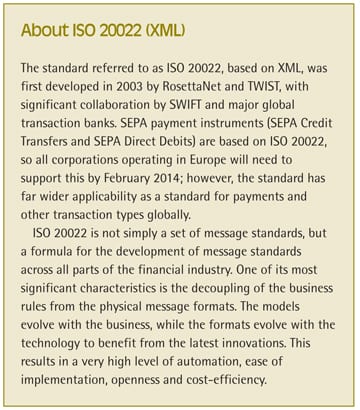 How Treasurers Can Keep the Cash Flowing Freely Online marketplaces are increasingly seen as one of the most effective ways of leveraging customer and seller...

Paving the Way Towards Instant and Frictionless Payments

With SWIFT gpi bringing transparency and speed to the world of instant payments, it is pertinent to examine the difference in...

With the Covid-19 pandemic augmenting the focus on cash visibility, in-house banks...