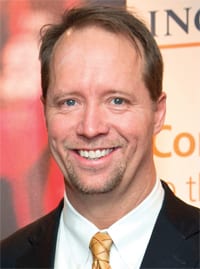 In this edition, we continue our series featuring insights from previous TMI corporate award winners with Rob Waddell, Global Treasury Manager at Brown-Forman Corporation. Together with colleague Mark Stegeman, Assistant Treasurer at Brown-Forman, Rob won the award for excellence and innovation in FX management. The company’s international business had grown dramatically over the previous decade. To facilitate this continued expansion and avoid the negative effects of increased exposure to foreign currency volatility, Brown-Forman put in place an efficient and robust forecasting and FX hedging process. In this interview, Rob talks about his career to date and offers advice to new entrants to the treasury profession.

Having qualified as a CPA (certified public accountant) I worked in internal audit for Brown-Forman and became friends with the assistant treasurer at that time. I left to become CFO of a small company that was a supplier to Nissan, but after a few years, I was looking for a new challenge. The assistant treasurer suggested I joined treasury at Brown-Forman, and although it was a change of direction from my career to that point, I had gained some experience of treasury in my previous role, so I made the move.

How did your career progress to the role you hold now?

I joined treasury as a manager; I have been promoted a few times since I joined twelve years ago. Initially, I started working on FX and cash management, then I became international treasury manager followed by global treasury manager, with both domestic and international responsibilities, including liquidity management, FX, hedging, bank transaction management and latterly, an in-house banking project. However, the company has grown considerably over this time, which has dramatically increased the demands on treasury and the importance and sophistication of the activities we undertake.

How do you think demands on treasurers have changed during your career so far, and what additional skills are required to meet these demands?

I think the need for technical knowledge, including connections into tax and legal, has become more important than ever.