We all firmly believe that the treasurer’s job has changed over these last five years. However it looks as if we are moving into a new phase of change and evolution for the job, a phase tinged with shades of grey. Transactions are becoming more complex and processes more burdensome because of the new regulations. Treasurers are battling to comply with these regulations and no longer have time to devote to tasks with a higher value added. This perhaps is the biggest challenge in the immediate future, not the regulations themselves. 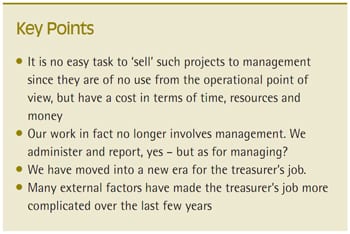 Moving to a new era for the treasurer’s job

We can expect 2013 to be the year of the plethora of regulations, even if many of them apply mostly in 2014, some of them even later. These new regulations will once again disrupt treasurers’ lives, change their organisational structure and divert them from their day-to-day work, preventing them from devoting their valuable time to tasks with a high(er) added value content. The example of EMIR and IAS 39 (soon to be replaced), which we will mention several times in this article, are good illustrations of these forthcoming gradual but profound changes. We have moved into a new era for treasury management. I would say that this job is taking on shades of grey because of the constraints and burdens weighing down upon it. Some jobs are pretty static and change little, other than from the point of view of their IT platforms. The treasurer’s job, by contrast, is relatively recent and keeps on changing by stealth, and not always for the better.