Emerging markets are changing where and how the world does business. For the last three decades, they have been a source of low-cost but increasingly skilled labor. Their fast-growing cities are filled with millions of new and increasingly prosperous consumers, who provide a new growth market for global corporations at a time when much of the developed world faces slower growth as a result of aging. But the number of large companies from the emerging world will rise, as well, according to a new report from the McKinsey Global Institute (MGI). This powerful wave of new companies could profoundly alter long-established competitive dynamics around the world. 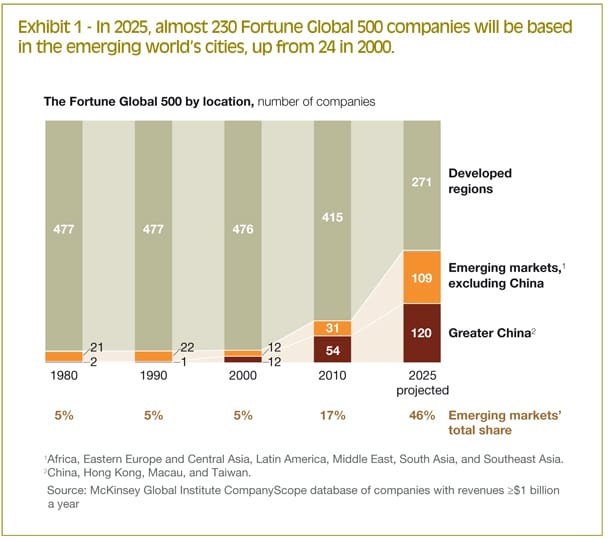 Our research shows that the emerging economies’ share of Fortune Global 500 companies will probably jump to more than 45 percent by 2025, up from just 5 percent in 2000 (Exhibit 1). That’s because while three-quarters of the world’s 8,000 companies with annual revenue of $1 billion or more are today based in developed economies, we forecast that an additional 7,000 could reach that size in little more than a decade—and 70 percent of them will most likely come from emerging markets.[1] To put this dramatic shift in the balance of global corporate power in perspective, remember that many of the world’s largest companies have maintained their current status for generations: more than 40 percent of the 150 Western European companies in last year’s Fortune Global 500 had been founded before 1900.

What to Do with Corporate Cash in Challenging Times

Collaborative Trade Finance: How to Unlock Liquidity at Speed

How finance leaders can reconcile and fulfill their growing portfolios of responsibilities.

A Modern, Agile, and Efficient Machine

TMI speaks to Raphael Barisaac and Massimo Ortino about how UniCredit's new payments strategy reflects the dynamics of a changing global market.